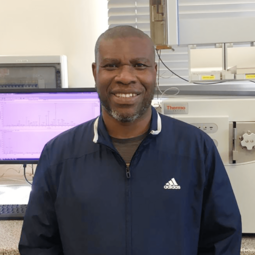 Reason for pursuing analytical science: It all started during a grade 11 experiment in a science class. We were preparing esters from alcohols and carboxylic acids. I liked the ester smell we produced. I knew then that that’s what I wanted to do. I also fell in love with GC after watching a scene in an episode of a forensics program. GC was used to determine whether a deceased person had taken any alcohol or drugs prior to death, as well as determining whether they had been poisoned.

Dinner party guest: The former state president of South Africa, Jacob Zuma. I am fascinated by his story. He was born in the rural town of Nkandla and lost his father at age four – and then went on to become president of the state. For someone who received no formal schooling to have achieved so much is amazing. I would like to ask what kept him motivated, among other things.

Misconceptions of science in Africa: Children growing up in rural areas of Africa think that science is a difficult subject and that it is meant only for the “smart” kids from the townships. Some Black children do not believe that they can reach the same heights as their white counterparts, but they can!

Nominator comment: He is a world-class GC-MS analyst who provides a cutting-edge service to industry, and he has been instrumental in helping many postgraduate students. I don’t think he gets the credit he deserves.

Around the World in 60 Scientists

The Power List is back, and this time we’re taking you on a trip that circles the globe – one analytical scientist at a time!

October Issue of The Analytical Scientist