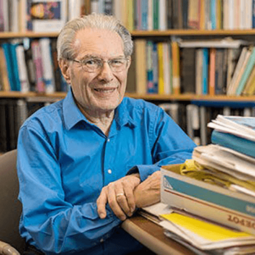 Dinner party guest: Einstein. In a single year (1905) he published three seminal papers. The first was on the photoelectric effect, for which he got the Nobel Prize in Physics. The second on diffusion theory almost won him the Nobel prize in Chemistry, and the third, describing relativity theory (including E=MC2), was hardly noticed at the time. He also coined the phrase: “Genius has its limitations but stupidity is not so incapacitated.”

Time travel destination: The moment after the apple fell on Newton’s head. Because of a pandemic then, Newton avoided Cambridge and London, and escaped to a far-away (in terms of the time) farm. And that’s why he was under an apple tree before making a discovery that would define modern science.

Advice to younger self: To be a successful scientist and teacher you have to understand human nature and jealousies. In my first year as an instructor, I introduced the use of computers to my senior students. The Dean, also a chemist, intervened and forbade me from doing the same the next semester, calling the use of computers “anti-educational.” One of these students eventually won the Nobel Prize for “Computational Chemistry.”

Nominator comment: I’m nominating Raoul because of his development of novel sensing/imaging technologies that use photoacoustics and photoacoustic lifetime-based measurements.

Around the World in 60 Scientists

The Power List is back, and this time we’re taking you on a trip that circles the globe – one analytical scientist at a time!

October Issue of The Analytical Scientist