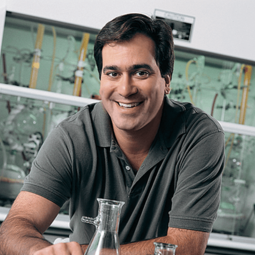 Most exciting current project
This is like asking someone to choose between their children! My projects involving nanocombinatorial chemistry and the development of spherical nucleic acids as cancer immunotherapies are moving in exciting new directions, with important implications in chemistry, biology, and human health.

Career highlight
The discovery of spherical nucleic acids, which are being used extensively in materials science, biology, and medicine. This discovery culminated in my receipt of the Dan David Prize from Israel last year, a special event because it highlighted the enormous effort made by so many outstanding researchers who have trained in my laboratories over the past two decades.

My scientific hero
Michael Faraday – he lays claim to a remarkable number of field- and world-changing discoveries, and he made them without many of the modern analytical techniques we now take for granted.

Nominator comment: “Most cited chemist in the world in the past decade and the inventor of dip-pen nanolithography, recognized by National Geographic as one of the top 100 scientific discoveries that changed the world.”